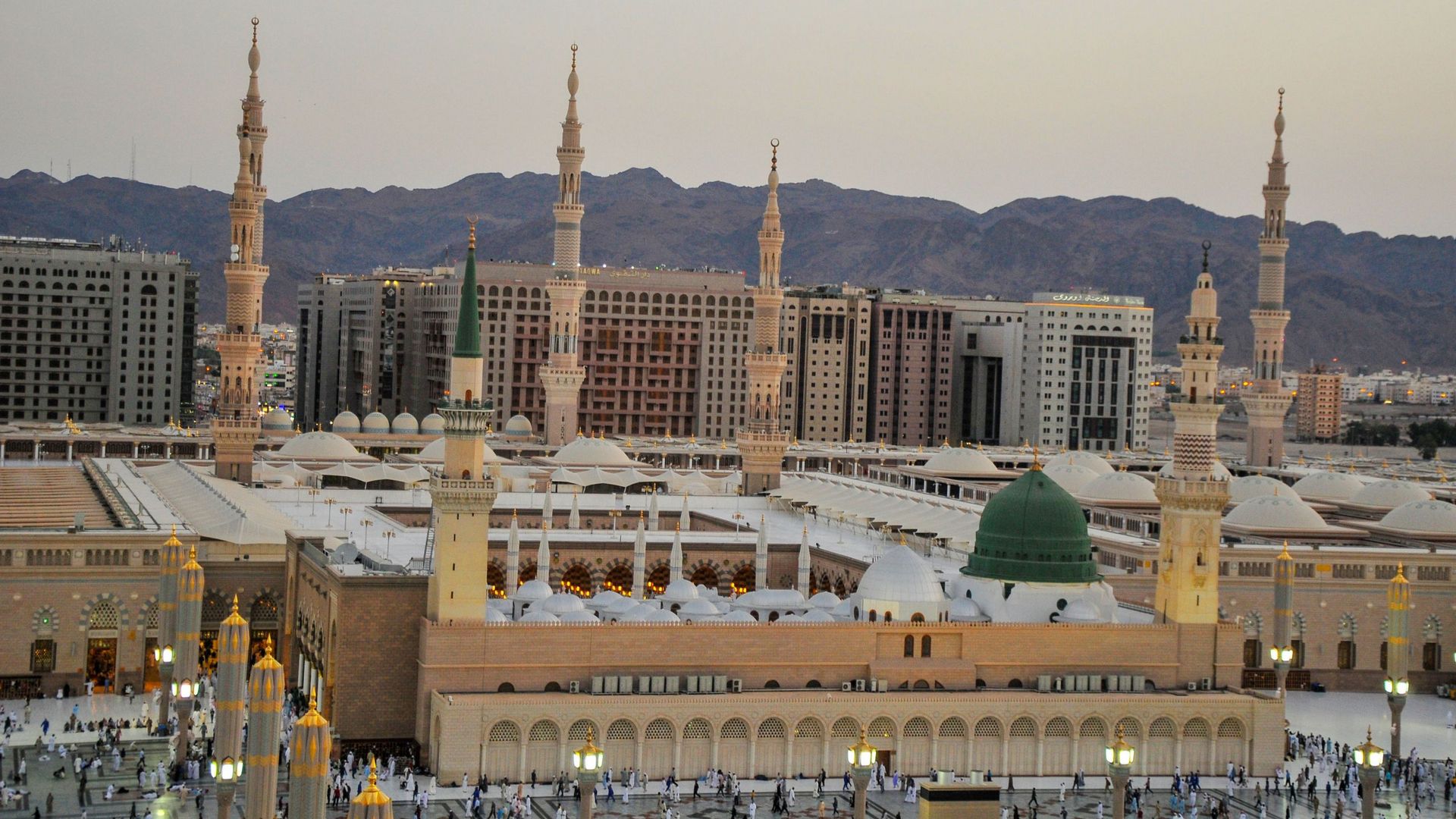 Significance
The original mosque was built by the Prophet Muhammad (sallallahu alayhi wasallam), next to the house where he settled after his journey to Medina in 622 AD. The original mosque was an open-air building with a raised platform. It was a rectangular enclosure of 30 m × 35 m (98 ft × 115 ft), built with palm trunks and mud walls, and accessed through three doors: Bab Rahmah (Door of Mercy) to the south, Bab Jibril (Door of Gabriel) to the west and Bab al-Nisa’ (Door of the Women) to the east. The basic plan of the building has since been adopted in the building of other mosques throughout the world. Inside, the Prophet Muhammad (sallallahu alayhi wasallam) created a shaded area to the south called the suffah and aligned the prayer space facing north towards Al-Quds/Jerusalem in Palestine. When the qibla (prayer direction) was changed to face the Kaaba in Mecca, the mosque was re-oriented to the south. The mosque also served as a community center, a court, and a religious school. Seven years later (629 AD/7 AH), the mosque was doubled in size to accommodate the increasing number of Muslims. Subsequent Islamic rulers continued to enlarge and embellish the mosque over the centuries. In 707, Umayyad Caliph Al-Walid ibn Abd al-Malik (705-715) replaced the old structure and built a larger one in its place, incorporating the tomb of the Prophet Muhammad (sallallahu alayhi wasallam). This mosque was 84 by 100 m (276 by 330 ft) in size, with stone foundations and a teak roof supported on stone columns. The mosque walls were decorated with mosaics by Coptic and Greek craftsmen, similar to those seen in the Umayyad Mosque in Damascus and the Dome of the Rock in Jerusalem (built by the same caliph). The courtyard was surrounded by a gallery on four sides, with four minarets on its corners. A mihrab topped by a small dome was built on the qibla wall. Abbasid Caliph al-Mahdi (775-785) replaced the northern section of Al-Walid’s mosque between 778 and 781 to enlarge it further. He also added 20 doors to the mosque: eight on each of the east and west walls, and four on the north wall. During the reign of the Mamluk Sultan Qalawun, a dome was erected above the tomb of the Prophet Muhammad (sallallahu alayhi wasallam) and an ablution fountain was built outside of Bab al-Salam (Door of Peace). Sultan Al-Nasir Muhammad rebuilt the fourth minaret that had been destroyed earlier. After a lightning strike destroyed much of the mosque in 1481, Sultan Qaitbay rebuilt the east, west and qibla walls. The Ottoman sultans who controlled Medina from 1517 until World War I also made their mark. Sultan Suleiman the Magnificent (1520-1566) rebuilt the western and eastern walls of the mosque and built the northeastern minaret known as al-Suleymaniyya. He added a new mihrab (al-Ahnaf) next to the Prophet’s mihrab (al-Shafi’iyyah) and placed a new dome covered in lead sheets and painted green above the Prophet’s house and tomb. During the reign of Ottoman Sultan Abdülmecid (1839-1861), the mosque was entirely remodeled with the exception of the Prophet’s Tomb, the three mihrabs, the minbar and the Suleymaniyya minaret. The precinct was enlarged to include an ablution area to the north. The prayer hall to the south was doubled in width and covered with small domes equal in size except for domes covering the mihrab area, Bab al-Salam and the Prophet Muhammad (sallallahu alayhi wasallam) Tomb. The domes were decorated with Qur’anic verses and lines from Qaṣīda al-Burda (Poem of the Mantle), the famous poem by 13th century Arabic poet Busiri. The qibla wall was covered with glazed tiles featuring Qur’anic calligraphy. The floors of the prayer hall and the courtyard were paved with marble and red stones and a fifth minaret (al-Majidiyya), was built to the west of the enclosure. After the foundation of the Kingdom of Saudi Arabia in 1932, the mosque underwent several major modifications. In 1951 King Ibn Saud (1932-1953) ordered demolitions around the mosque to make way for new wings to the east and west of the prayer hall, which consisted of concrete columns with pointed arches. Older columns were reinforced with concrete and braced with copper rings at the top. The Suleymaniyya and Majidiyya minarets were replaced by two minarets in Mamluk revival style. Two additional minarets were erected to the northeast and northwest of the mosque. A library was built along the western wall to house historic Qur’ans and other religious texts. In 1973 Saudi King Faisal bin Abdul Aziz ordered the construction of temporary shelters to the west of the mosque to accommodate the growing number of worshippers in 1981, the old mosque was surrounded by new prayer areas on these sides, enlarging five times its size. The latest renovations took place under King Fahd and have greatly increased the size of the mosque, allowing it to hold a large number of worshippers and pilgrims and adding modern comforts like air conditioning. He also installed twenty-seven moving domes at the roof of Masjid Nabawi.

Selection Criteria
vi. to be directly or tangibly associated with events or living traditions, with ideas, or with beliefs, with artistic and literary works of outstanding universal significance.

State of Preservation
The Mosque apply to a 24 hours’ maintenance program and in perfect condition.