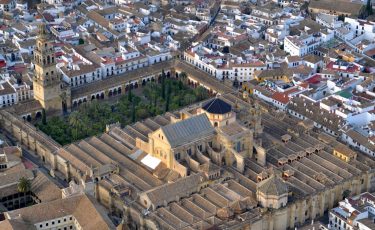 Significance
Great Mosque of Cordoba is a building that symbolizes the many religious changes Cordoba has undergone over the centuries. It is the highest expression of Islamic art in Spain and the most important historic mosque of the West. The monument belongs to an established functional type, the hypostyle mosque, but amounts to more than a mere variant of this type. As the primary artifact of an Umayyad dynasty that had fled from Syria to Spain in the 8th century, the monument has an architectural vocabulary pointing to local Spanish and Syrian Umayyad sources. However, it is morphologically and aesthetically distinct: a unique reformulation of preexisting architectural details and arrangement of universal forms. Despite its uniqueness, the Mosque of Cordoba has a considerable influence on western Muslim art.

Selection Criteria
i. to represent a masterpiece of human creative genius
ii. to exhibit an important interchange of human values, over a span of time or within a cultural area of the world, on developments in architecture or technology, monumental arts, town-planning or landscape design
iii. to bear a unique or at least exceptional testimony to a cultural tradition or to a civilization which is living or which has disappeared
vi. to be directly or tangibly associated with events or living traditions, with ideas, or with beliefs, with artistic and literary works of outstanding universal significance

State of Preservation
The mosque had deteriorated over time. The restoration set out to repair damaged sections of the mosque, while also revealing parts of the mosque that lay hidden under additions and renovations carried out previously.