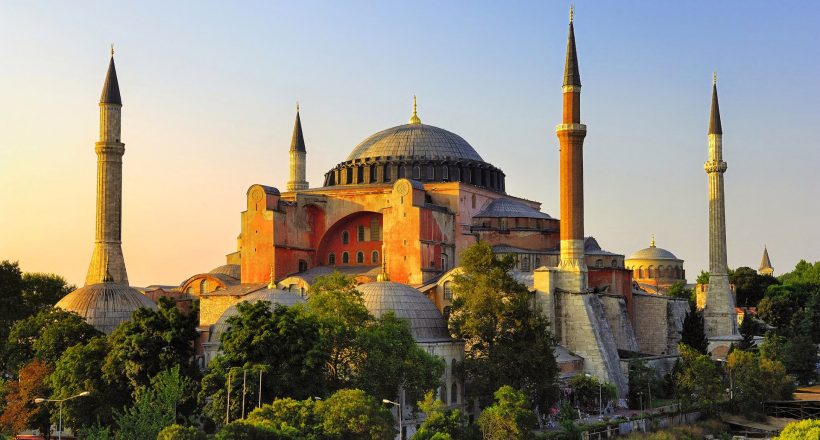 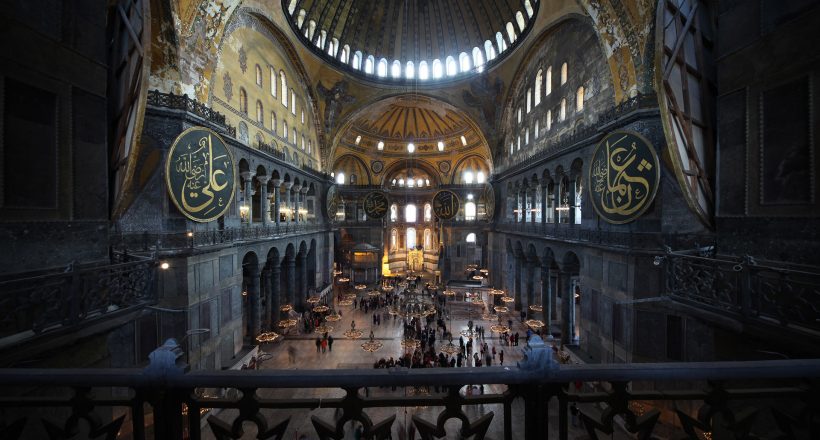 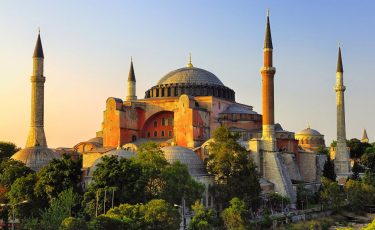 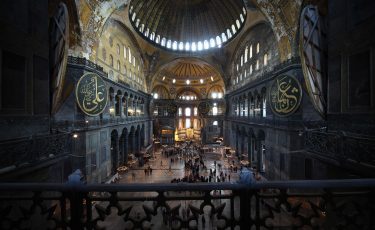 Significance
The Hagia Sophia, one of the most important monuments of the world architectural history, survived until today; It is an important place in the art world in terms of its architecture, splendor, size and functionality.
Hagia Sophia is the largest church built by the Eastern Roman Empire in Istanbul and was built three times in the same place. When it was first built, it was called Megale Ekklesia (Great Church), and from the 5th century on, it was defined as Hagia Sophia (Holy Wisdom). Hagia Sophia served as a cathedral as the capital’s largest church where rulers were crowned throughout the Eastern Roman Empire.
Today’s Hagia Sophia was built by Emperor Justinianos (527-565) by Isidore from Miletos (Milet), who were the two important architects of the period, and Anthemios from Tralles (Aydin). According to the historian Prokopios, the construction, which started on February 23, 532, was completed in a short period of 5 years and the church was opened to worship on December 27, 537.
The innovation in Hagia Sophia’s architecture is the combination of the traditional basilical plan and the central domed plan. The building has three naves, an apse, and two narthexes, internal and external. The length from the apse to the outer narthex is 100 m. width is 69.50 m. The height of the dome from the ground is 55.60 m, its diameter is 31.87 m in the north-south direction and 30.86 m in the east-west direction.
During the IV. Crusade, Istanbul was occupied by Latins between 1204 and 1261, during this period both the city and Hagia Sophia were plundered. It is known that Hagia Sophia was in a very devastated state in 1261, when Eastern Rome took over the city again.
Hagia Sophia was turned into a mosque after the conquest of Istanbul by Fatih Sultan Mehmed (1451-1481) in 1453. Immediately after the conquest, the building was strengthened and preserved in the best possible way, and it continued its existence as a mosque with the Ottoman period additions. The building, which has been damaged by various earthquakes since its construction, was built in order to support both the Eastern Roman and Ottoman Periods. The minarets built by Mimar Sinan also serve as a supporting buttress in the building.
A madrasah was built in the north of Hagia Sophia during the reign of Sultan Mehmed the Conqueror, underwent maintenance and repair work in every period, and the most comprehensive repair work was done by Fossati during the reign of Sultan Abdülmecid (1839-1861). During the reconstruction of Hagia Sophia during the reign of Sultan Abdulaziz, the madrasa was demolished between 1869 and 1870 and rebuilt between 1873 and 1874. The ruins of the madrasa, which was destroyed in 1936, were unearthed as a result of excavations in 1982.
In the Ottoman Period, in the 16th and 17th centuries, mihrabs, pulpit, muezzin halls, sermon lectern and maxura were added to Hagia Sophia.

In Hagia Sophia, during the reign of Sultan Abdulmecid, between 1847-1849, Swiss Fossati Brothers had a comprehensive repair. During these repairs, the Hünkar Mahfili, which was located in the niche to the north of the mihrab, was removed and replaced by the Hünkar Mahfili, which rises on the columns to the left of the mihrab, surrounded by wooden gilded balustrades. Written by Calligrapher Kadıasker Mustafa İzzet Efendi in the same period, the 7.5 m. 8 line plates with a diameter of 8 are placed on the walls of the main space. “Allah, Hz. Muhammad, Hz. Abu Bakr, Hz. Umar Hz. Osman, Hz. Ali, Hz. Hasan and Hz. These plates with the inscription “Hüseyin” are known as the biggest calligraphy plates of the Islamic world. The same calligrapher wrote the 35th verse of Surat an-Nur in the middle of the dome. Hagia Sophia was turned into a museum wieth the order of Mustafa Kemal Atatürk and the decision of the Council of Ministers and was opened to local and foreign visitors as a museum on February 1, 1935. According to the title deed dated 1936, Hagia Sophia is deemed deed to be the “Ayasofya-i Kebir Mosque Şerifi” consisting of Tomb, Akaret, Muvakkithane and Madrasa on behalf of Fatih Sultan Mehmed Foundation in 57 map, 57 island, 7th parcel.
In 2020 Hagia Sophia reverted into a mosque again by the initiative of the Turkish government.

Selection Criteria
i. to represent a masterpiece of human creative genius
ii. to exhibit an important interchange of human values, over a span of time or within a cultural area of the world, on developments in architecture or technology, monumental arts, town-planning or landscape design
iii. to bear a unique or at least exceptional testimony to a cultural tradition or to a civilization which is living or which has disappeared
vi. to be directly or tangibly associated with events or living traditions, with ideas, or with beliefs, with artistic and literary works of outstanding universal significance

State of Preservation
Ayasofya mosque repaired and restored many time through the time. After conquest of Constantinople Architect Sinan made a a restoration on the building and added the minarets which are also serving as supporting buttresses for the main dome.
In Hagia Sophia, during the reign of Sultan Abdulmecid, between 1847-1849, Swiss Fossati Brothers had a comprehensive repair. During these repairs, the Hünkar Mahfili, which was located in the niche to the north of the mihrab, was removed and replaced by the Hünkar Mahfili, which rises on the columns to the left of the mihrab, surrounded by wooden gilded balustrades. Still restoration process has been carrying out by Turkish goverment in many part of the historical building since its value as outstanding universal value